Kiana Davis is a Renton Technical College adjunct faculty, poet and author working on a project called Unyielding Roots. The project is on hair esteem and self-love amidst a world that doesn’t get your hair culture. (this story originally broadcast in February 14, 2020) END_OF_DOCUMENT_TOKEN_TO_BE_REPLACED

The Black Panther Party was active in Seattle, offering protection and services for the local black community.  Services included a free breakfast program which fed hundreds of children in Seattle, and a free health clinic, today monikered as the Carolyn Downs clinic in Seattle’s Central District.   The women of the Black Panther Party were a force behind the movement.  END_OF_DOCUMENT_TOKEN_TO_BE_REPLACED

The Book They Can’t Erase – The Jeli, Keeper of Stories

Arsalan Ibrahim’s life was turned upside-down one day with the purchase of a West African music CD.  This marked the start of a long journey into deep connection with his ancestry and lineage of storytelling.  Today, Ibrahim is a Jeli of the Mande tradition, using the kora as the vehicle to pass on stories and support the bridge of knowledge between Africa and North America.

Special thanks to Logic Amen and the Griot Party Experience for this story. 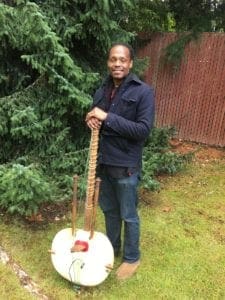 END_OF_DOCUMENT_TOKEN_TO_BE_REPLACED

2 Stories: PTSD and the Media – and a Ferguson Story

Musician, Author and Theologian, Reverend Osagyefo Uhuru Sekou was arrested for praying in front of Ferguson, Missouri riot police, in 2014 during the protests for slain teenager, Michael Brown. He shares that story with KBCS’s Yuko Kodama.

END_OF_DOCUMENT_TOKEN_TO_BE_REPLACED

Depression in the Black Community

END_OF_DOCUMENT_TOKEN_TO_BE_REPLACED Dr. John Carlos and Dave Zirin on sports and politics

1968 Olympian, author and Olympic Project for Human Rights organizer, Dr. John Carlos and author and sports writer, Dave Zirin talk sports and politics. Dr John Carlos authored his memoir with Dave Zirin, “The John Carlos Story: The Sports Moment that Changed the World.” That moment is when Olympic medal winners in the 200 meter race, John Carlos and Tommie Smith raised their black gloved fists in protest during the national anthem at the Olympic prize ceremony. Peter Norman, the silver medalist also pictured in the iconic photo, wore an Olympic Project for Human Rights badge in support. This was more than a moment. It was a movement.