Freedom Rides of the 60’s to Protest Segregation 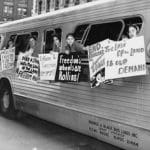 in 1961, civil rights activists boarded interstate buses, making trips throughout the American South, to protest segregation in bus terminals. The group started out with 13 people but many joined the movement. Dr. Bernard Lafayette Jr. was inspired to become a freedom rider and played a key role early on in the organizing of the Selma, Alabama voting rights campaign. KBCS’s Sonya Green interviewed Dr. Layfayette Jr. about his experiences as a freedom rider and civil rights leader, in this four-part series.