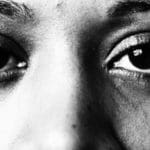 Listen to what it feels like to be a minor behind bars on our KBCS series on Incarcerated Women as KBCS’s Yuko Kodama speaks with Shontina Vernon, a local artist who was formerly incarcerated in Texas, at age 10.

At the start of the war on crime in the 1980’s, Shontina Vernon became one of many youth of color caught in the Texas juvenile justice system. She recounted to me what life was like behind bars for her as a 10 year old in this interview from 2018.

Often there were young people with no outlet for their emotional life – it’s basically the same as what happens in an adult prison, right? You take it out on each other, you become the target of 1 person or there’s always a feeling that danger is lurking, despite the illusion of safety. As a survival mechanism or technique, you sort of collapse more into yourself – into your own inner life, inner world, as a way to protect yourself from others and also as a way to survive. If you’re one of those young people that doesn’t want any problems, you keep your head down, you become really introverted. You know, you just move really mechanically through the process each day, you really try to pull in. Also, you can very easily slip into a space where you can’t trust yourself, either. Because you’re here, you’re in this space, you’re in this cell, you are made to feel as if there is something about you that is fundamentally flawed or wrong. You may not know what it is, but, it’s a feeling that walks with you as a result of your surroundings.

Because it’s used as a punishment for something that you did.

Yes. Yes. And if no one is really talking to you about the nature of what you did, and really contextualizing it from the perspective that you are a child, then you draw your own conclusions. And you begin to make up your own stories about who you are and why you’re there and whether or not you’ll ever get out or what your life now means as a result.

Yeah, so what are some of the kinds of stories that go through your mind as a 10 year old, in a space like this?

Oh, I mean, “I must be really bad”. “I’m not wanted”, you know, you begin to believe the sort of systemic language that is used around you – the “legal-ese”. When, you know, when your prosecuting attorney says, oh, you’re a terror to the community, you have to be really vigilant and strong, to be a 10 year old and not internalize that, right? So you begin to take on the system’s language about you and who you are, rather than the language of people who love you, and who are invested in you doing well. You’re trying to cling on to the words of just a few folks. And who’s to say that every young person moving through the system encounters somebody that can see them, and that can acknowledge something human about them? If you don’t get that you’re just moving through the system. And, so, it’s sort of like a, kind of, choreographed, vacant way of living and existing in that space that you begin to take on. And it’s hard. I understand this, as I’ve had the chance to speak to lots of adults who have been in the system, it’s a thing that’s very difficult to shake, once you re-enter; the feeling of having to sort of shut down in order to survive your circumstances.

So at night, when it’s lights out, and you get into bed, you know, what were some of the things that you think about?

You think about home. You think about things that you remember – from home. You cling to your memory of your room, of your favorite things to play with, of the people that you hope will still be there, or that will remember you when you return. At least that’s what I used to think of, or, you know, you just pray to the unknown that, like, whatever this thing is that has you here will let up and you will have a reprieve and be forgiven and have another chance at things. So you think of all those things.

I think the most common is anger, and just lashing out – being very violent. A lot of the youth were violent to themselves, violent to each other, you know. So it’s turning whatever those feelings are of – whether those feelings are hate or feelings of unworthiness, you turn them on yourself and on others. And that’s generally what those young people would do while they were there. And also the power, the power differences between the people who worked there and the young people that were incarcerated were obvious all the time and always at play. So in any way that they could go about trying to exert their power or just going against authority. To me, that is about resistance and you’re trying to sort of hold on to this very core part of yourself. And so that’s what I would see – I would see folks really trying to buck the system and to lash out and often very angry and retaliatory at each other. But when that didn’t work, it became turning it in on themselves.

That was artist Shontina Vernon, a Rauschenberg fellow and the creative director of the Visionary Justice Storylab, speaking with me in 2018. Special thanks to Producer Ruthie Bly for her help in editing the incarcerated women series.