END_OF_DOCUMENT_TOKEN_TO_BE_REPLACED

Hardy Merriman is President and CEO of the International Center on Nonviolent Conflict. For nearly two decades his work has focused on human rights and prodemocracy movements around the world that use non-violent tactics, strikes, boycotts, non-cooperation and other non-violent actions to fight authoritarianism. END_OF_DOCUMENT_TOKEN_TO_BE_REPLACED

Looking for a way to get involved in ensuring the integrity of the coming election?  Find out how Star Trek fans are rolling out a campaign that’s in line with the Starfleet’s prime directive.  END_OF_DOCUMENT_TOKEN_TO_BE_REPLACED

El Centro De La Raza, in Seattle’s Beacon Hill, hosted “BYOB: Bring Your Own Ballot Party!” on October 27th, 2018; a special gathering to help voters. The event provided assistants and interpreters to answer questions about this year’s election ballot, and celebrated the act of voting with live music. KBCS’s Gol Hoghooghi spoke with several people at the event.

END_OF_DOCUMENT_TOKEN_TO_BE_REPLACED 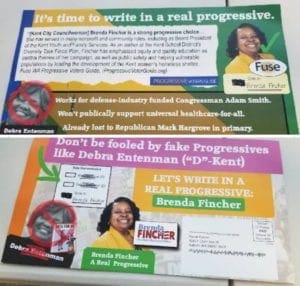 END_OF_DOCUMENT_TOKEN_TO_BE_REPLACED

KBCS’s Elections 2018 coverage turns to Initiative 1631, focusing on pollution and clean energy. The measure would charge pollution fees on sources of green house gas pollutants and use the revenue to reduce pollution, promote clean energy, and address climate impacts under oversight of a public board. KBCS’s Jim Cantú spoke with Dana Bieber, coalition spokesperson for the No on 1631 campaign, and Mo McBroom, from The Nature Conservancy; an organization that is part of the coalition supporting Initiative 1631.

END_OF_DOCUMENT_TOKEN_TO_BE_REPLACED

Election 2018 – BYOB: Bring Your Own Ballot Party in Seattle

In an effort to help get out the vote, El Centro de la Raza in Seattle’s Beacon Hill, is hosting the BYOB: Bring Your Own Ballot Party!; an event on Saturday, October 27th, 2018, to help voters understand their ballots. KBCS’s Yuko Kodama spoke with Miguel Maestas, El Centro De La Raza’s Housing and Economic Development Director, about the event.