END_OF_DOCUMENT_TOKEN_TO_BE_REPLACED

91.3 KBCS · 91.3 KBCS 20201230 Henry Miyatakes Suitcase Final
In 1941, Henry Miyatake befriended a Jewish boy who had fled Poland with his family.  They went to the same middle school during WWII.  This is a story about their relationship, before Miyatake and his family were incarcerated by the US government.   Tom Ikeda, Densho Project Co-Founder interviewed Miyatake and recounts the story.

END_OF_DOCUMENT_TOKEN_TO_BE_REPLACED

This series of events forever changed the lives of the Japanese American community along the west coast of this country.  This set of excerpts from the Densho Project oral histories, highlight what some of the younger local Japanese Americans experienced at that time.

Special thanks to the Densho Project for the audio.

Image: from the Densho Project

Commemoration of the Bombing of Hiroshima

On August 6, 1945, the United States dropped an atomic bomb on Hiroshima, Japan, resulting in estimates of over 200,000 deaths within months of the event. This was the first of two of the only nuclear weapons used on civilians in the world’s history.

Shirley Shimada’s family is from a fishing village outside of Hiroshima. She shares her family’s stories about how bewildered the Japanese people were with the impact of this new munition. END_OF_DOCUMENT_TOKEN_TO_BE_REPLACED

Never Again Is Now Artwork to be featured at Bellevue College

Artist, Erin Shigaki, will be installing an art mural near the Bellevue College Main Campus Fountain today. The artwork is a wheatpaste of two children at a US government incarceration camp for people of Japanese descent during WWII.

Shigaki describes the art piece and why she chose this image for an installation.

Japanese American, Singer and Songwriter, Kishi Bashi’s (Kaoru Ishibashi) latest album, Omoiyari highlights the experiences of incarceration. The Japanese word, Omoiyari, means holding empathy and compassion. The album is the result of two years of Ishibashi’s numerous interviews with with those affected by, and visits to former WWII internment camps, where around 120,000 Japanese descendants across the United States were incarcerated.

KBCS caught up with Ishibashi before his Seattle performance at the Showbox SODO in early October.

Thanks to John Woodgate for transcription.  Special thanks to Tamiko Nietering for assistance with this story.

Kishi Bashi, is a singer and songwriter whose most recent album “Omoiyari” centers its lens on the experiences of about 120,000 Japanese descendants who were incarcerated in internment camps during the Second World War. Research for this album took Kishi Bashi, or Kaoru Ishibashi on numerous trips to visit former internment locations throughout the United States. He spoke with me about this experience at the Showbox Sodo in early October.

Yuko Kodama 0:50
Tell me about that first time that you went to Heart mountain and what that felt like for you as someone coming from a family that didn’t experience being incarcerated in the camps.

KB 1:04
That wasn’t the first place I went, actually I went to Manzanar and Poston first actually, and some of the West Coast sites like the assembly centers. And honestly, it was a little troubling at first. I went to Manzanar and I don’t know if you’ve been there, but it’s a beautiful place under the Sierra Nevada mountains. It’s very peaceful, you know, you go there and you’re wonder “why am I not feeling the trauma, or the injustice that happened” and I think you can’t feel bad about yourself for not being able to process things immediately. I think it sometimes it takes time might take years and maybe never, you know,

Yuko Kodama 1:35
As you’re talking about this, you know, you might have had a more difficult time processing it at first, but then you’ve come to work on music that is speaking to the processing of this and videos around this as well. So as you’ve been processing, where’s it taking you?

KB 1:54
I was writing music all throughout. Sometimes at the places sometimes just in hotel room or sometimes at home, after visiting and I think what that really did was to collect my ideas in to a musical form that I could compile later. I definitely have a larger view of what the conflict was like in World War Two ethnically and racially, you know, it was it was a complicated time.

KB 2:23
Well, okay. Like, for example, I have a sample theme for Jerome, which I wrote for the Jerome incarceration center in Arkansas, which I visited. And what I didn’t really realize initially, was that the camps are really full of Japanese people. We like to say, Oh, they were Japanese Americans. And for the most part, they were Japanese people coming to America to make a better life for themselves. And obviously, their kids were naturalized, born in America and as American as anybody could be, right. But there’s so much Japanese culture in these camps, that a lot of it was suppressed. And a lot of times, parents from Japan, “Issei”, first generation parents, would make the difficult decision of suppressing their culture in order for their children to survive. And for me that was extremely painful because I value my Japanese heritage and I speak Japanese. It’s kind of heartbreaking for a parent to have to do that for their kids. And I think there’s probably some immigrant communities today in America that might feel similarly that they have to make this difficult decision to suppress their culture so that their kids can have a better shot at assimilating

Speaker 1 4:00
Tell me about your daughter, you took her to Heart mountain? What made you decide on that? This is a personal journey for you where you took your parents and how was that? What brings you back to these places where people were formerly incarcerated over and over?

KB 4:17
I mean, honestly, it’s I think the people bring me back. You know, I’ve made a lot of friends in in Cody, and also people who attend heart mountain, the pilgrimage. For my daughter, it’s like, I want her to know what I’m working on. She knows everything about what I’m working on. Honestly, she’s likely will you stop talking about internment, you know, and I’d be like, “I wish I could”, but I talk to her about a lot of things and I’m convinced that her generation at least, you know, the people I see, are more empathetic, you know, and more ethical, I think, than I was when I was a kid. You know, to know that they’re okay with like LGBT and they’re actively trying to not be racist, you know, is is something that I, when I was 13 I didn’t I didn’t have any of that. Nobody was discussing racism. That much, you know, definitely nobody was gay, you know, they’re everyone’s in the closet, you know, back then. So I think like to see that it gives me a lot of hope and that when that whole generation becomes voting adults and taxpaying adults, it’ll be a different society. I also like to point out that a few years ago, over 50% of all school aged children are people of color. So that’s a very powerful indicator that this country is really headed into a more dynamic, diverse society that will have just only positive benefits, I think.

Yuko Kodama 6:06
Next is part two of segments from a KBCS interview with singer and songwriter, Kishi, Bashi or Kaoru Ishibashi. Kishi Bashi shares his take on mass incarceration and racism with me at the Sodo showbox venue on October sixth.

KB 6:42
When I started to look into Japanese incarceration, there’s something that always was at the back of my head that I had to address which is like mass incarceration. The largest like ICE facility here in like Tacoma the detention facility, you know, Something that’s, I feel like every opportunity I get, you know, I need to mention it because it’s it’s such a problem. So “Angeline”, the song is about convict leasing, which is Jim Crow era, basically, criminality that was put on the African American people like especially males after the reconstruction after the Civil War, the South quickly just made up a bunch of the vagrancy laws to convict African Americans so that they could impose a fine upon them that they had to pay off through hard labor. So chain gangs, all those things, those are a result of convict leasing. And basically the foreman would come and the sheriff would round up people, and then just put them back on the plantations that they could have been formerly slaves on. Many considered it worse than slavery, because as a slave, you wouldn’t want them harmed, because they have to work for you, but as convicts, you could just work them to death. And so that’s the unfortunate story after the civil war that a lot of people still don’t really understand. We know the word Jim Crow, it’s in the textbooks, but the Legacy of Jim Crow and like lynching and all this stuff is still being uncovered. It’s a difficult topic for, especially for white people in the south to talk about, but it’s just something that needs to be continually acknowledged and talked about.

KB 8:39
African American males are viewed as criminals, you know, and this is why they end up in jail because it’s easier to put them in jail if you think they’re criminals, right? So it’s the kind of thing that I felt so strongly about, especially since I live in the south, I live in Georgia. There’s two camps in Arkansas. To see just this systemic racism that still exists there. It’s difficult to if you’re in a position of privilege to really acknowledge, but it’s just all around you. And if there’s so many communities that always live as second class citizens, you know, unfortunately.

KB 9:36
I mean, the most important thing about racism and discrimination, is that you just have to keep talking about it because it’s not like black or white or it’s a very nuanced thing for different people in different situations. So it’s literally evolving, dynamically, like every day, but it just needs to be talked about, you know, constantly.

KB 10:06
We’re all human beings with varying levels of fear and discomfort. Intergenerational the you can be a complete racist when you’re 18 and become a great part of society when you’re older. You know, people change.

I think we all have our preconceptions about what the world is supposed to be like. Every single person has a different perspective. They’re all like different universes. any random passer by has a world as vivid as your own. So you know, to have that in mind is a little humbling, but also makes it kind of exciting.

Yuko Kodama 11:35
That was music artist Kishi Bashi speaking with me in early October at the Showbox Sodo. 91.3 KBCS this is Yuko Kodama 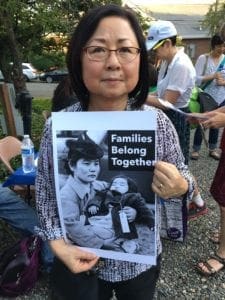 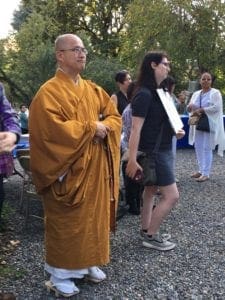 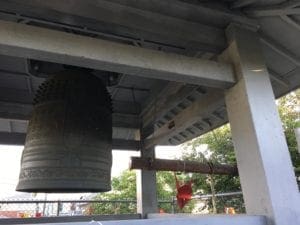 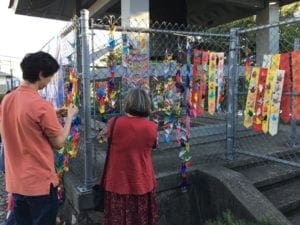 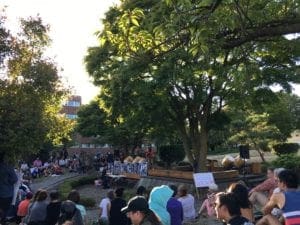 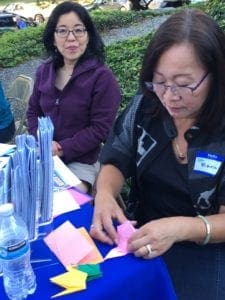 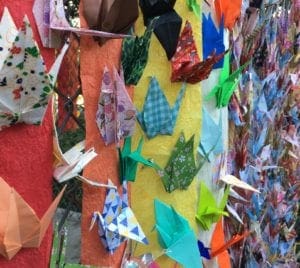 “From Hiroshima to Hope” is an event commemorating the bombing of Hiroshima, Japan that occurred on August 6, 1945. The evening features musical performances, a Buddhist meditation, and floating lanterns on Seattle’s Green Lake. END_OF_DOCUMENT_TOKEN_TO_BE_REPLACED